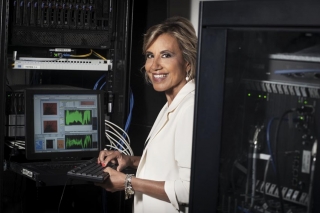 Tiziana Catarci received her PhD in Computer Science from Sapienza - University of Roma, where she is currently a Full Professor in Computer Science and Engineering, director of the department of Department of Computer, Control and Management Engineering Antonio Ruberti. Until 2020 she was director of the ECONA research center, that involves multidisciplinary research groups from several Italian universities. Until June 2018 she was director of the Sapienza Design Research Center, a multidisciplinary research center on interaction design. From July 2015 to April 2017 she was also the President of Kion S.p.A., a CINECA company. CINECA is the Italian university consortium for advanced information technology applications and services.

Tiziana Catarci has been candidate to be the Rector of Sapienza for the period 2014-2020, cf. SapienzaFutura

Tiziana Catarci is the Editor-in-Chief of the ACM Journal of Data and Information Quality. Moreover, she is regularly in the programming committees of the main database and human-computer interaction conferences and is associate editor of the World Wide Web Journal and the Journal of Data Semantics. She has been co-chair of several important international conferences in both database and hci areas. In particular, in 2008, she has been the Co-chair of the 2008 edition of the largest and most important conference on human-computer interaction, ACM CHI. Dr. Catarci has been a founder Member of the Italian Chapter of the ACM Special Interest Group on Computer-Human Interaction.

Tiziana Catarci has a large experience in running national and international research projects, and supervising researchers and students working on her topics of interest. Moreover, she and her group have been among the first in Italy to work on HCI, both from a theoretical and from an experimental point of view, and to introduce the HCI course in the computer engineering curriculum of Sapienza.

Finally, she is very active in combating gender disparities and promoting the STEM disciplines among female students by promoting dedicated projects at both school and university level and acting as role-model for “Inspiring Girls”(http://www.inspiring-girls.com/) and other initiatives.

Tiziana Catarci's main research interests are in theoretical and application oriented aspects of visual formalisms for databases, information visualization, database design, cooperative information systems, user interfaces, usability, digital libraries, data quality and Web access. She is recently working on AI ethics as a founder of SIpEIA, the Italian Scientific Society for Ethics in Artificial Intelligence https://sipeia.diag.uniroma1.it/. On these topics she has published over 200 papers in leading journals and conferences and 20 books. Her contribution can be regarded as one of the first and most significant examples of deep analysis and formalization of the interaction between the user and the database, which takes in consideration both usability issues and language related aspects.

In 2003  was the recipient of the IBM Eclipse Innovation Award for the SEAWER - SEmantic Annotation of WEb Resources project.

Since 2016 she is member of the prestigious European Academy of Sciences and Arts (www.euro-acad.eu).

In 2017 she received the Levi Montalcini Association award for the "diffusion of scientific culture among younger generations".

In 2020 she has been included in the list of World's Top 2% Scientists compiled by the Stanford University (https://data.mendeley.com/datasets/btchxktzyw/2).