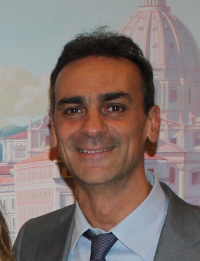 Luca Iocchi was born in 1970 and received his Laurea (Master) degree cum laude in Ingegneria Informatica (Computer Engineering) from University "La Sapienza" in Rome, Italy in 1989 and
his PhD degree in Computer Engineering from the same University in 1995, defending a thesis "Design and Development of Cognitive Robots". He is Assistant Professor since 1/3/2002 within the Dipartimento di Informatica e Sistemistica (Department of Computer and System Sciences) and the Faculty of Engineering.
He has been research scholar at Fondazione Ugo Bordoni in Roma from november 1998 to october 1999, research engineer at Stanford Research Institute, Menlo Park, CA, USA from nov. 1999 to apr. 2000, Post-Doc at Universita' di Roma "La Sapienza" in 2000-2002 and research visitor at Stanford Research Institute, Menlo Park, CA, USA from April 2004 to January 2005.
His research activity is mainly focussed on methodological, theoretical and practical aspects of artificial intelligence, with applications related to cognitive mobile robots and computer vision systems operating in real environments. Research results have produced more than 100 articles in published in national and international journals, 3 best-paper or top-paper awards and 1 best robotic demo award at AAMAS 2008.
He has been organizer of workshops and special issues, reviewer for many international journals in the field of artificial intelligence and multi-agent systems, program co-chair of the International RoboCup Symposium 2008, and PC member of the most important conferences in AI, robotics and multi-agent systems, including IJCAI, AAAI, AAMAS, ICRA, IROS, and several others. He is also member of the Board of Trustees of the RoboCup Federation and in the Executive Committee of the RoboCup@Home international scientific competition.
He joined many national and international research projects since 1998 and collaborates with many Italian and international research groups and companies producing technological solutions in the fields of security, surveillance and environmental monitoring.