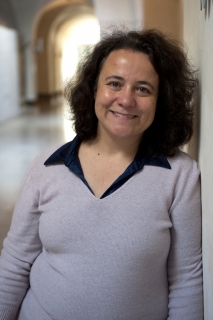 Chiara Petrioli is Deputy Rector for scouting, fundraising and business incubation at Sapienza University of Rome where she is full professor at the department of computer, control and management engineering. She is founding partner of “La Sapienza” spinoff WSENSE S.r.l. and has been coordinator of the Ph.D. program in Computer Science of the University of Rome La Sapienza. Professor Petrioli research interests concern the design and optimization of future wireless, embedded, IoT and cyber physical systems. Prof. Petrioli is chair of the steering committee of IEEE SECON, TPC co-chair of EWSN 2021, has been general co-chair of ACM MobiHoc 2019, program co-chair of IEEE INFOCOM 2016, workshop co-chair of ACM MobiCom 2014, and general chair of ACM SenSys 2013. She is associate editor of ACM/IEEE Transactions on Networking. She has been member of the steering committee and associate editor of IEEE Transactions on Mobile Computing, member of the steering committee of ACM SenSys, associate editor of IEEE Transactions on Vehicular Technology, member of the executive committee of ACM SIGMOBILE, member of ACM Europe Council, associate editor of Elsevier Computer Communications, guest editor of special issues for IEEE Access, Elsevier Ad Hoc Networks, Elsevier Physical Communications, and has been program co-chair of leading conferences in the field, such as ACM MobiCom and IEEE SECON. Prof. Petrioli has published over a hundred and fifty papers in prominent international journals and conferences (over 7400 citations; h-index 45). She has been the PI of over twenty national and international research projects, serving as coordinator of two EC projects (FP7 projects GENESI and SUNRISE) and of two EASME projects (ArcheoSub and Seastar) highlighted as success stories on the Digital Agenda of Europe and featured by international mass media including BBC, RAI SuperQuark and Presa Diretta, Wired USA, the Guardian, Bild magazine, National Geographics, Rai TG Leonardo, Rai Mediterraneo, Rai Codice. Her research has resulted in international patents and in award-winning innovative technologies. She is a pioneer of the Internet of Underwater Things, an area on which she has led the development of breakthrough technologies listed in the NT100 Top “Social Global Techs changing our lives 2016.” She has been included in the list of top influential women in technology "Inspiring fifty" 2018, she is one of N2Women 2019 Stars in Computer networking and communications, one of the IEEE Fellows class of 2021 for her contributions on wireless and underwater networking. She has been included in the list of top 2% of world scientists by Stanford, in the list of 50 women who have made/are making the history of computer science, among the female innovators selected as The #euwomen4future by the European Commission, and among Repubblica D 100 women to change the world 2021 https://www.repubblica.it/d/2021/08/13/news/donne_cambiare_il_mondo_eroi.... Prof. Petrioli was a Fulbright scholar.