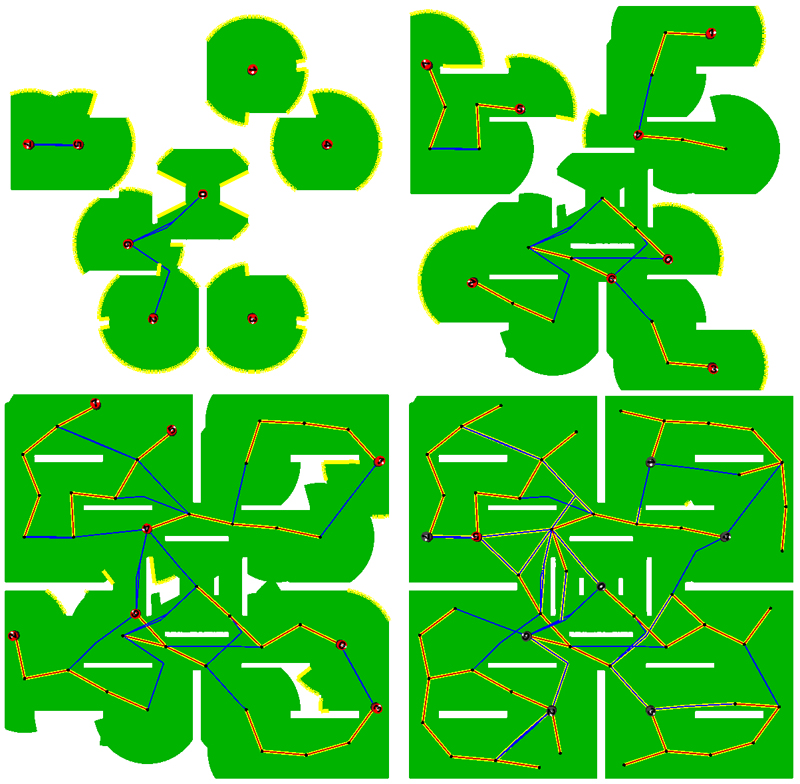 The Multi-SRG method is a decentralized cooperative exploration strategy for mobile robots. A roadmap of the explored area, with the associate safe region, is built in the form of a compact data structure, called Sensor-based Random Graph. This is incrementally expanded by the robots by using a randomized local planner which automatically realizes a trade-off between information gain and navigation cost. Connecting structures, called bridges, are incrementally added to the graph to create shortcuts and improve the connectivity of the roadmap. Decentralized cooperation and coordination mechanisms are used so as to guarantee exploration efficiency and avoid conflicts. Simulations are presented to show the performance of the proposed technique.

The Multi-SRG cooperative exploration method has been designed and developed by: A. Franchi, L. Freda, G. Oriolo, M. Vendittelli.

More theoretical details are given in this paper presented at ROBOCOMM'07.

Descriptions of experimental setup and results are given in the paper "Decentralized cooperative exploration: implementation and experiments", submitted to IAS'08.

Realized within the Move3D (a powerful motion planning software environment realized at LAAS-CNRS) under the assumption of perfect (although limited-range) sensing and localization, these simulation clips highlight the performance of the Multi-SRG method for cooperative robot exploration.

Simulation 1: scattered start (AVI clip, zipped). The robots are initially scattered in the environment (as if they had been parachuted).

Simulation 2: clustered start (AVI clip, zipped). The exploration is started with the robots grouped in a cluster (more realistic for environments with a single main entrance).

Note how the robots assume different colors during the exploration:

Realized within our software under the assumption of limited communication range and perfect (although limited-range) sensing and localization, this simulation show the creation of local networks and the data exchanging process (AVI clip). The robots are initially scattered in the environment (as if they had been parachuted).

Conducted with a team of 4 Khepera III robots. A wireless card and a Hokuyo URG-04LX laser rangefinder has been added to the standard equipment of each robot.

Back to the LabRob Home Page